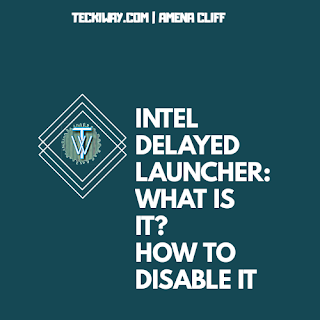 So you have been having a slow boot up, and it’s said that the reason for that is the Intel delayed launcher.,  even the dell community has been talking about it
Do you know what it is? What does it do?
Well, there are many misconceptions around this particular computer component, but we’ll clear the air with proven facts and solutions with this blog post.
First you have to realize that your boot up time is influenced by the number of pre-startup applications, so that’s something to look at, because you would have to disable one of them.
One of such apps is the Intel delayed launcher. Without FudaAdo let’s learn more about it.

What is the Intel Delayed Launcher Or file name (iastoriconlaunch.exe)?

The Intel Delayed Launcher is a start up application and it is part of an app called: Intel Rapid Recovery Technology. This is also part of the Intel Rapid Storage Technology.
The purpose of this is to speed up the computer, as it promises faster speed on your drive and shorter load time while opening applications.
It also helps to prevent Data loss if at all the drive does fail.(This is for those using the RAID storage)

What does the Intel Delayed launcher do?

Because the system is still booting up, the local run register settings to run the iastoriconlaunch.exe, this delays the boot up by an estimated (30-60) secounds.
The only way to prevent this is by disabling Intel delayed launcher from msconfig.
But here’s the bad side of it.
The delay actually allows recovery to take place, the Intel ® Rapid recovery Technology restores the hard disk from the recovery partition.
It is the windows default way of preventing virus from accessing the system files, so removing Intel delayed Launcher, won’t allow recovery. The choice is yours.

As I said earlier, the choice is yours, but here’s why I won’t disable it.
Remember, this is a recovery system that ensures that, you are logged into your computer, before a virus or malware does so.

So if your computer is attacked with malware or virus, especially the ones that come on during boot, you will have to thank the Intel Delayed launcher.

Why I would want to disable Intel Delayed Launcher

As you know already this delays boot time by 30-60 seconds, so if you feel this is talking your time and you can’t wait, then go ahead and disable it.
One other reason why I won’t is because, my computer security could be so tight that it is not prone to getting a virus. So if you never end up using it, that’s 30- 60 seconds wasted.
So as I said before, it’s a personal decision, and if you feel, you want to disable Intel Delayed launcher, then you can go on and let’s see how to disable it.

How to disable Intel Delayed Launcher:

So we’ve gotten to when we would need some more practical work.

First Method: Using Msconfig to remove Intel Delayed Launcher from the list of start up applications (For Windows 7 users)

So if you evaluated you needs and see that you don’t need the Intel technology, follow these steps to disable it.

1. Use the keyboard shortcuts Windows+ R to open Run 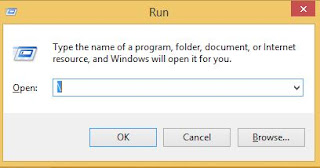 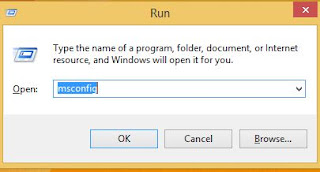 4. Scroll down and look for delayed Launcher, uncheck the box. 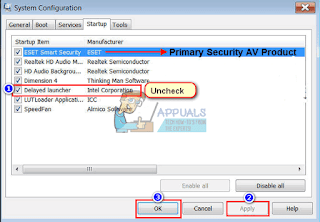 1. Use the keyboard shortcuts Windows+ R to open Run

4. A blank white window is shown, but click on Open Task Manager 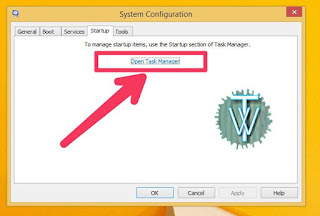 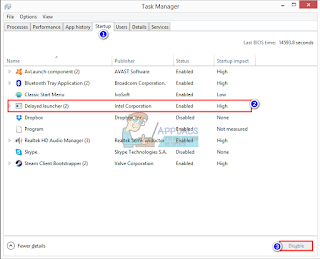 6. Click on Disable on the bottom right hand side of the screen.
7. Restart your computer.

So far we have learnt more about the Intel Delayed Launcher, and also how to disable it, I hope this is helpful to you, and if it is, share to those who need to speed up their boot up